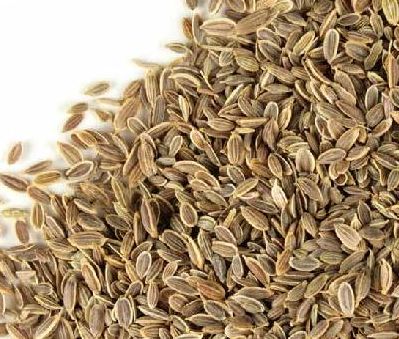 We manufacture, export and supply organically cultivated Dill Seeds. The dill seeds are sundried and have the minimal moisture content. With zero admixture presence, the dill seeds are acclaimed to be 100% pure.

Dill is an annual herb native of Central Asia, it is also widely grown in Europe and Northern Africa for its culinary and medicinal use. Dill weed,dried leaves of the same plant is also used for flavouring. It is milder in taste when compared to dill seed. Dill seeds are originated in Central Asia. It is however is also grown in large quantity in Egypt and Mediterranean countries or Eastern Europe. It is also getting popular in North America. It’s related species Sowa is grown in India whose fruits are larger but less fragrant. India and Pakistan are the major dill production areas, Egypt, Fiji, Mexico, Netherlands, United States, England, Hungary are other commercially productive areas, making small contributions to the world production.

India is the leading producer of dill seed and its derivatives. The exports of the essential oil and seeds have grown over the past five years. India supplies whole and powdered spice to various European countries.

Uses:-
Fresh and dried leaves are widely used as herbs in many countries. Fern like leaves are used to flavor many dishes.Dill or sowa is used in Ayurveda as a medicine for various diseases such as bronchitis, ulcers, spermatorrhoea, cardiac disability, fever, gleet and syphilis. Dill or sowa is a small annual plant with smooth and fine leaves.